Startup ideas aren’t easy to work out. Those simple, creative ideas may have some patterns, especially for social networks.

Startup ideas aren’t easy to work out. Those simple, creative ideas may have some patterns, especially for social networks. We are going to briefly analyze the Big three social networks in terms of Facebook, Twitter and Foursquare.

The first pattern I call it “Forum Pattern” as those startups, social networks are sort of transformation from web forums. Common web forums are subjects and topics oriented, the attraction focuses on the discussion. The easiest way to imagine how transformation occurred is to think about design of data behind the scene in abstraction.

The only differences in brief is the organization of the data. Facebook abstractly relocated the user attention from the topics to users themselves. Twitter has the similar pattern. Twitter is still a topic oriented, however, it added two restrictions(length of topic title and no detailed description of the topic); the replies are transformed to a topic like entries. Essentially, Facebook and Twitter are still forums, should we call them new generation forum? It’s almost like evolving creatures. We are named human, but our kids has evolved genes and different characteristics.

I shouldn’t name this pattern as “forum evolved pattern”, but my point is that it’s still in a forum form. We have discussed abstracted Facebook and Twitter. In comparison of Twitter and Foursquare, Foursquare has a new born genetic as known the location which organizes each Twitter entry in groups of unique locations.

This pattern means that the platforms allow installing (adapting) new applications (genes). Wait, this doesn’t sound new, does it? I used to see a lot of ancient web forums allow developers/administrators to install plug-ins. It was firstly adapted to Facebook that allows users to install third party applications in a much much more easy way; Apple adapted the Apps Pattern and moved it from Web to the iOS. 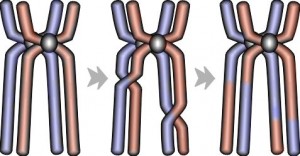 The purple is the platform itself and third party applications crossovered with the platform and evolved to a new genetic. Now imagine that we have thousands and millions of those red genetic and there is only one type of purple.

I felt it was so clear that some other social networks and startups are evolved in similar patterns. There are new creatures has the similar characteristics but living in a different way, one of the example could be Foursquare (focus on local business) and Gowalla (focus on social & friends). There are so many examples out there and the rest you name it.

It’s like this two brothers, they could end up differently.

Here are some final words. The questions is how long they are going to survive. As long as my memory tells, those good old forums were hot. They weren’t that hot because the Internet wasn’t so popular at that time. Now, anyone who has a little knowledge of computing can setup a forum in a few minutes, will that happens to those evolved forums? My answer is Yes. StatusNet is an open-source Twitter like micro-blogging(remember it’s still a forum) platform and people could set it up easily within their own organization.

Now, this makes me headache. I’m thinking about generation loops.